The Twelve Days of Christmas – a daily writing challenge 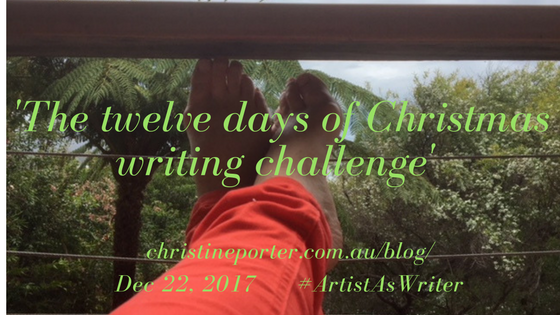 This is the plan.

This year I plan to write.
Even though it’s not yet time for New Year’s resolutions, and far too late for last year’s, what I mean is that this year, while I’m on my annual beach-holiday break, I intend to write.

For whatever reason, this Christmas I have only 12 days to spend here. Part of me wants to step right away from the screen. The other part remembers how much I enjoyed the website re-write in September and how the daily edits often included a writing warm-up opinion-piece at the start of each day.

Rewriting the website meant editing every element of it. I phoned my friend Carleen* the day I was tweaking one of the menus. (Who needs the Oxford Comma debate when there are near life-changing implications about issues such as lower-case versus upper-case and other design decisions needing long distance phone calls?)

Carleen, bless her designing, insightful mind suggested I change The Artist to a simpler Artist and to rename the Blog pages Writing.

But I do enjoy writing and find myself with hobbies that allow me to write.
I’ve written as far back as I can remember, all the way back to primary school.

I think it’s because I want to keep writing as something I do for fun. I want to play with this thing and let it be a verb rather than a noun, an activity rather than a commodity.

So, in the spirit of exploration, I accept the Christmas holiday writing challenge.
Twelve days: twelve opinion pieces.
Published as part of my website blog, or filed away for other days.
Call the exercise writing or Writing it doesn’t matter much.
But I’ll be interested to see what happens when its given some proper time of its own. Perhaps I’ll even come to terms with that menu item, third from the end at the top of this page.

*Carleen is the CEO and chief graphic designer at Evoke Design, based in Launceston. She is a legend. 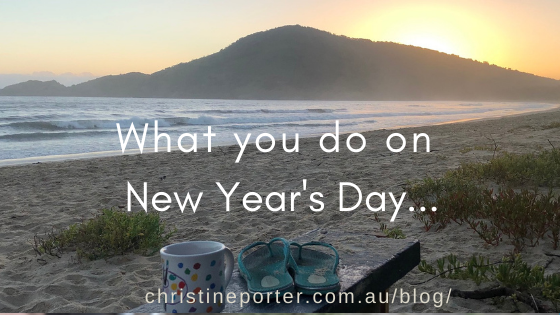 What you do on New Year’s Day, you do for the rest of the year.

January the first has such a heavy load to carry.  All those New Year’s resolutions (revolutions) promises made, inevitably broken.  January two is easier, no

In Fear of Mud

Qu: When is a watercolour not a watercolour Answer: When it’s a painting. There are many opinions about what constitutes a “watercolour”. There’s fine lines

Ok friends.Who wants to come up to Gympie on the 21st of March, a Saturday afternoon, and drink champagne with me to celebrate this exhibition?

On a clear day you can see forever

Painting in the field is one of life’s great pleasures. I love getting out of the studio into my other studio – the great outdoors.