A series of ten artist-made  perspex boxes – the face of which is engraved by Christine with  drawings from her sketchbook of the shed at “Newstead”. The boxes contain a gallery-bought postcard of “The Golden Fleece” by Tom Roberts an iconic Australian painting, painted in 19894, also known as “Shearing at Newstead”. Tom Roberts, in his lifetime, had been a regular visitor to “Newstead” creating several of his famous paintings there. 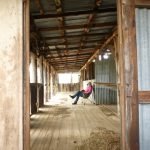 From the outset this project was always going to be more than a painting of a shed on a hill, with a past. Because of it’s historical importance, it had to be more than just a simple visual discussion of line, form, tone. Being on-site at “Newstead”,drawing the shed as it was, I was re-seeing Tom Roberts’ shed. But neither could I un-see what he’d already shown us. 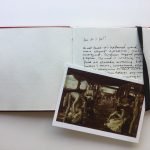 Drawing sharpened my perception: “It’s not like this any more” I heard myself think. Overlaid too was the peculiar feeling, sitting in that very spot, that I was making artwork in Tom Roberts’ shadow. It challenged me to maintain a grip on the integrity of my own personal creative mark in the face of artwork of this magnitude. 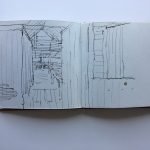 Back in my studio, I chose ten images from my sketchbook. I scratched, dremmelled and sandblasted the drawings onto small Perspex sheets, creating areas that were either transparent, translucent or opaque. I then constructed boxes with these Perspex drawings as the face. On the back wall of the box I placed a gallery postcard of The Golden Fleece. The audience literally has to look through my drawings to see his image. My drawings change the way the postcard version of his painting can be seen, just as his painting impacted on what I saw. In truth we can only ever see the world through the filter of our own experiences.

All of the perspex boxes have sold. Christine has her small collection chosen from this suite if you’d like to call over and have a look.

The boxes were exhibited at Christine’s major exhibition Shadowing Tom at the Inverell Art Gallery in Feb-Mar 2017. There were installed with artwork that had been printed from the engraved face of the boxes.

Before I made the boxes I printed from the engraved surfaces, creating a small edition of each of the ten images. In this exhibition they’re installed with the parent work, but they’ve already been exhibited in their own right as individual artworks.

Then I printed them without ink. Some of the plates were deeply engraved, so they’ve embossed well. Others hold very little of the original language.

These artworks represent how with each successive generation, we are becoming more distant from the Tom Roberts’ version of sheep and shearing, and even of making art. Each year becoming even more distant. Eventually his original image of The Golden Fleece will become completely meaningless to most people, it’s symbols already losing relevance for so many Australians.