An ongoing series of etchings, by Australian artist Christine Porter, that explores how everyday objects can anchor abstract thought or feeling to a particular time and place. Autobiographical in nature, the titles create a meditative space that, whilst personal, speak never-the-less of the universal experience.

A few of the etchings from this suite that have sold out.

Galleries that stock this suite of etchings

In 2013 Christine Porter was invited to take part in an artwork swap exhibition between artists from the Inverell Art Gallery and a gallery in Durham, UK as part of the celebrations surrounding the temporary return of the Lindisfarne Gospels.  image: ‘Journey I’ 2013 multi-plate colour etching 20x60cm

‘Journey’ is a body of work inspired by the story of the Lindisfarne Gospels and its journey back from London to the place they were created 500 years earlier. The artwork is 20 x 60cm to represent the proportions of a scroll, one of the oldest book forms known. The image is made up of many small images printed from some of the 140 etching plates  I’ve editioned since I began printmaking. They tell the story of my journey as a printmaker, but are not printed chronologically, thus describing the way memory is itself episodic, organic and multi-layered.  One proof of the edition includes an embossed pattern from some of my grandmother’s crocheting – speaking of certain imposed patterns of time-keeping, but the rest of the edition allowed the layers of images, lost and found, to hold the narrative.
Christine Porter Lismore 2013 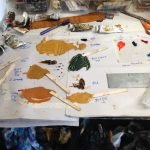 The two pieces that make up this small but complicated series were each editioned to 5. At the time I boasted about the thrill of being able to succeed in editioning a 23 plate etching. It took me days. The world was amazed – well the colour etching world was anyway. It was a wonderful experience to go through all the plates I’d made and put them into a story. It was also more than a little fun to extend my printmaking muscles and take the media to a place where it can.

Journey I was awarded 2nd Prize at the 2013 Royal Easter Show, and sold there. It won first prize at Aspects Art Show in Goondiwindi in 2014 and first prize in the “other media” section at the Barcaldine Art Show that year.Everywhere it was shown, it was admired.

There are none of ‘Journey I’ remaining, and only a few of ‘Journey II’. Contact us if you are interested in seeing these.