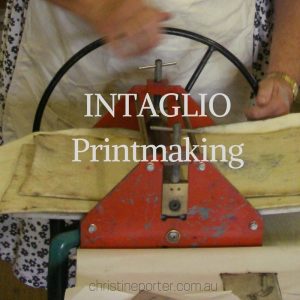 In the Printmaking menu above are the various etching series that Christine has explored over the years. Because etchings are created to be original artwork in multiple, there is often work from earlier times still available.

However, the physical process of pushing the metal or plastic plate through a press, like the one shown, means that the plate can change, especially in a large edition. Often before the edition is completely printed. This shopping cart is mostly kept up to date, but Christine will let you know if there are issues.

One day I was having lunch – not thinking about anything in particular. A magpie stepped into my field of vision. I watched him and realised, suddenly, that here was a wonderful painting subject. Lunch forgotten (except by the magpie) I sketched him. The resultant series of 24 drypoint engravings, of which this is one, tell a story of the most familiar of all Australian birds. An unfinished story I’m sure, but for now, these four-and-twenty black (and white) birds celebrate the magpie’s delightful, ubiquitous presence in all our lives.

Medium: drypoint engraving, wiped a la poupe in blue/grey ink. Printed onto 300gsm cream Hahnemuller paper.
Individual titles are the roman numerals. Part of the joy of this bird is that every Australian has a magpie story. I felt that by putting my own titles on these characters I was claiming a narrative that wasn’t completely mine.

Implications of a Fairytale Childhood

I
Last month, while visiting my mother, my bedtime read was from the bookshelves of my childhood. I was astonished to find myself recognising immediately the characters, plot lines and indeed the nuances in books I couldn’t have even named a week before. I wondered how had these and other stories informed my adult world?  Did the indoctrination work?  Have they made me a “better” person? Has my understanding of “right and wrong” been stained rather than just coloured by the culture imparted by those narratives already archaic when I first read them forty years ago?
What happens to a culture when the next generation is weaned on stories of violence, anger and disrespect.
II
The widespread use of fairy stories in the enculturation of generations, is evidenced in the way appropriations of those very stories litter our screens, monitors and bookshelves. Fairy-tale characters and narratives exist in the public domain all the while being a vehicle for our own personal narrative/s.  Christine Porter Lismore 2012

Click on each image for more information about that work.
Or use the ADD TO CART button to buy immediately through our secure shopping cart.
OR If you would prefer not to shop on-line contact Christine directly.

Inspiration: My friend Di van Dorrsen suggested the subject but I couldn’t work how to represent, in the permanence of zinc and copper, something as fragile and ephemeral as a dragonfly. Eventually I became the dragonfly flitting about trying everything, until a whole series of images resolved themselves suddenly, in a rush, using many different techniques. 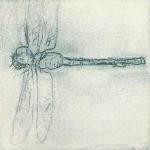 Research: I discovered the dragonfly’s entomological peculiarities: its 30,000 lenses, its wing speed, its pre-historic ancestry. How its life span includes a dramatic mid-life transformation from earthbound to airborne. How, living as it does, hovering between air and water, it appears to commune with what would drown the rest of us. I found how cultures all around the world had applied supernatural and symbolic interpretations to its existence. Some say it would come during the night and sew up the mouths of the ill speaking. It had been informing my culture all along and I’d hardly known it.

Titles: Each piece in the suite refers to some part of the dragonfly’s mythology or physicality. The collective title, the dragonfly diaries, relates to its peripatetic habit. It implies a transformative journey recorded on a sun-spun wing tip, the same wing abandoned days later –  evidence of the dragonfly’s perilously short, (though, I soon discovered, symbolically imperative) life span.
Christine Porter , Lismore October 2010

Exhibitions: ‘Moondreamer‘ was selected as finalist in the 8th British International Miniature Print Exhibition which toured the UK 2012-2014.

An ongoing series of etchings that explores how everyday objects can anchor abstract thought or feeling to a particular time and place. Autobiographical in nature, the titles create a meditative space that, whilst personal, speak never-the-less of the universal experience.

Christine Porter has been making artwork about shearing sheds since 1984 when she worked on a cattle station near Charters Towers in far north Queensland. Since then her practice, especially her painting, has been based on the portrayal of these buildings that are both iconic and everyday. Ageing quietly in the harsh sun of western Queensland and New South Wales they are for her both subject matter and symbol. Each year Christine makes artwork about two or three rural properties that provides an image-base and ideas-base for both her painting and printmaking practices.

Created as part of the major body of work over 2015-16 about the shed at “Newstead” near Inverell where the famous Australian artist, Tom Roberts, painted “The Golden Fleece’ 120 years ago. These drawings were engraved and sandblasted into perspex then printed from the engraved plates, which were then used as the front wall of a series of mixed media pieces. This work was shown in its entirety at a major exhibition in Inverell in February 2017. Etchings in this suite are exhibited at Barebones Artspace in Bangalow, and at Christine’s studio/gallery in Lismore. (contact for an appointment to visit).

This suite of etchings complemented the exhibition the shearing shed held at the Sheep Breeds Pavillion at the Royal Brisbane Show (the Ekka) in 2005 and also Andrew Harris Vineyards in Mudgee later that year.

This is an ongoing suite of etching begun in 2004. This series is about the importance of protecting a heritage that is told in the everyday objects stored, almost carelessly, in “museum sheds” on rural properties all over the country. Please contact Christine directly to purchase any prints from this series.

These etchings are more literal interpretations of the agricultural architecture that has become both symbol and icon for many Australians. In style, they relate directly to the paintings they are created alongside. Because there are very few of this series left, it’s best to contact Christine directly if you are interested in any of these etchings.

It was a long time before I saw the beauty in this peculiar plant that was changing the face of our landscape in the Goondiwindi of the early nineties. My friends in the industry would travel to the States and come back with artwork depicting the U.S. cotton industry – an industry that was as old as white settlement in Australia. I hadn’t seen anything that really enthused me about the subject until one day I saw a boll backlit by the afternoon sun. I had my muse. In the ten year time period between 1997 and 2006 I explored the subject more fully, but only through the etching medium: I have made very few cotton paintings.There are only a few etchings still available from that time. Contact us if you would like to see the other images from the suites.