But First I have to Draw the Goats 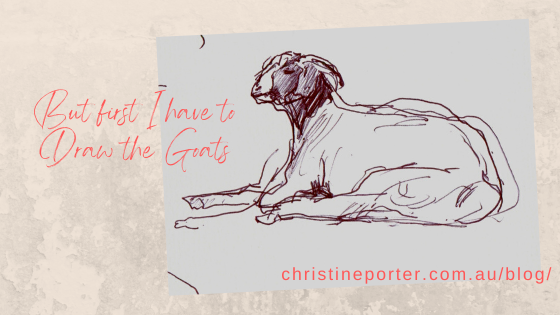 Earlier this year I had an exhibition to deliver.
To Stanthorpe.
Which is in Queensland.

Which is across a state border that suddenly, in these Covid times, has been much more of a border than it used to be. Last year, at the beginning of this pandemic, for the first time in a century, the border was closed between New South Wales and Queensland. This year, late June 2021, six weeks before I was to deliver my yet-to-be-finished exhibition, I was growing uncomfortable about the threat of a second border closure expected any day.

I did what had to be done. I packed up and took myself to Queensland for the duration. I would be away for six weeks. I had a painting series to finish, an exhibition to organise, but I was ready for anything.

I often camp when I’m travelling. It’s easier. However, Stanthorpe is cold midwinter. That’s its claim to fame, A bit too cold for camping and painting. So instead, I went to a friend’s place near Gatton. She runs a trail riding business there, and has opened up parts of her property for camping. I set up  my large, very comfortable tent as a studio, and finished the paintings. Long days, but peaceful without the worry of borders, or the intrusions of the internet and phone. It was such a refuge that, after I’d delivered the work to the family, and before I had to reconfigure it for public exhibition at the Regional Gallery, I went back and had a break. I read my book, caught up on some sleep, did some sketching. 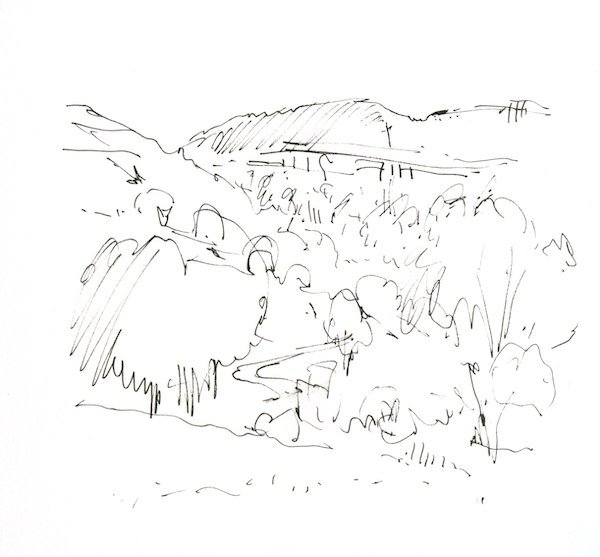 My sketchbook of that time away is an (almost) daily record of the sights and sounds, the thoughts and worries. And the very last page, the ending that was in fact the beginning of the next chapter of this rather bizarre episode of #ThisArtistLife, were the words: First I have to draw the goats.

First I have to draw the goats.

In the past, Sue had a much larger herd of Boer goats on her property. The three remaining are combination weed-eaters, tree-trimmers, and pets. The visitors love them. (I loved them until they worked out how to get into my tent and then stole the biscuits.) At the time the imperative to do some drawing of those three was a small whisper in the back of my mind that I paid attention to. Later, I realised that there are in fact many reasons why, as artists, we should stop and draw the goats. 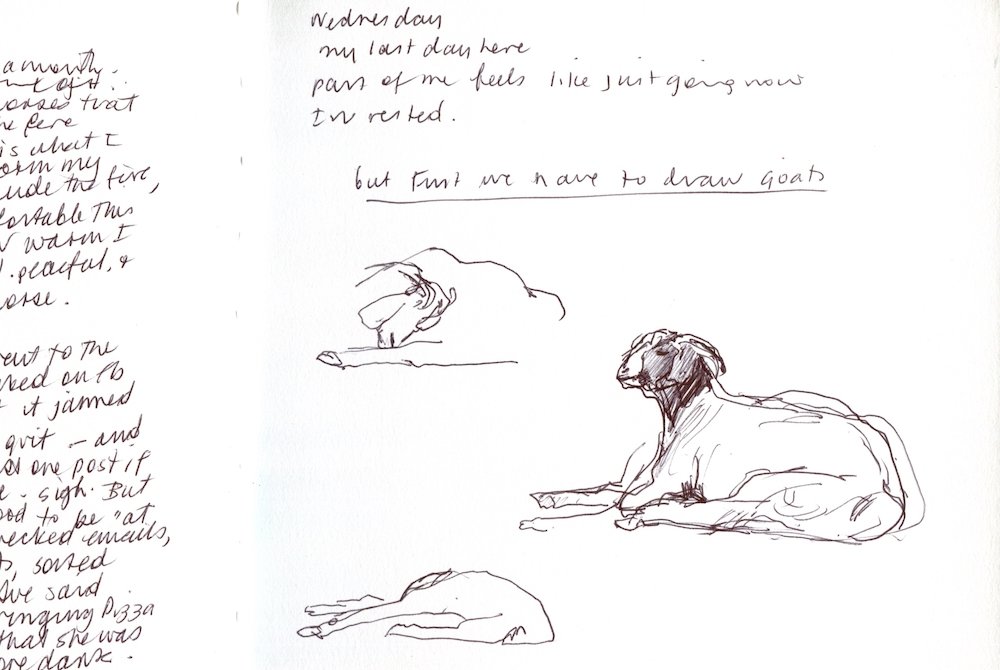 Draw the goats today, because tomorrow they might be grazing somewhere else on the property

In other words. Seize the day. Don’t waste the opportunities, even if there are things planned already.
If a list can be written, it can be re-written just as easily.

Draw the goats, because often animals aren’t used to humans

As well as the three goats, there’s Tip the Wonder Dog, and about thirty horses that Sue has for her trail riding business. The herd is a collection of giant lawn mowers:  grazing, snickering, watching, sleeping, or being led, ridden or following any person with a pail. It was like living in a Chagall painting, especially when they grazed at night near my tent, doing that cavorting thing: the white ones freakily luminous in the moonlight.

I’d never had a chance before to spend time with horses, or goats, up close. Racehorses don’t stay still, work horses are too busy, these horses of Sue’s were used to people, so they ignored me. I didn’t ignore them. Drawing the horses was like tapping into every caricature of every horse ever drawn. Soon I knew I would start to identify differences, and create likenesses, but for today it was enough to spend that time looking, and making horse-like marks in my sketchbook. 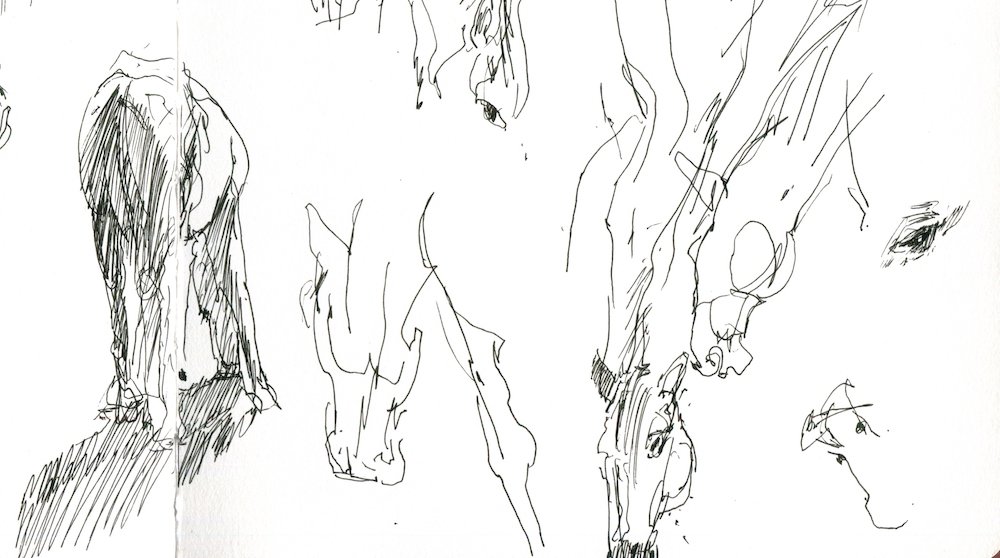 Draw the goats, because they are what is in front of me.

The first week I was at Fordsdale I was simply using the space as a studio – no ifs or buts, the work HAD to be finished, so that’s what I did.
When I came back for a few days of rest, I knew I wanted to make some art about this amazing place, but where to start?  The property is a thousand acres, all of it picturesque. Too much choice can cripple an artist into a welter of indecision. So, I started with what was in front of me. The goats. The horses. Only the landscape I could see from my campsite. No point borrowing trouble, I’ve heard said. No point trying to paint a thousand acres when the few metres in front of you has everything you need. Next time I’ll go further afield, but even then, it will still be what is in front of me, that day, that time. 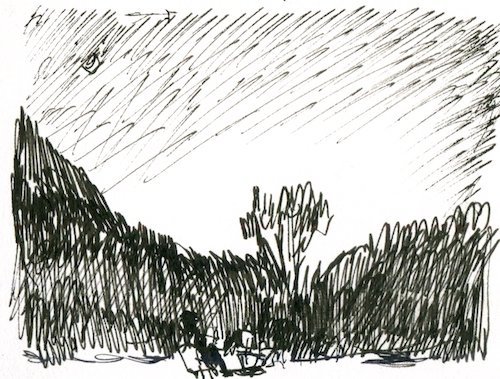 Draw the goats, because I’ve never drawn goats before, and this is a chance to learn.

Every time I draw a shearing shed, I learn more about drawing shearing sheds. Every time I draw a sheep, or a breed of cattle I’ve not painted before, or a goat, I’m learning more about how to draw those things.
I’m still learning. I’m always learning.
Drawing is a way of helping us to see. It’s way of slowing the mind and interrogating exactly what is there. Identifying the shapes, lines and tones of the animal in front of me is meditative. By drawing this goat, as it rested in the hot sun, I was adding to my understanding of what a goat looked like: the shape of the forehead, it’s funny old-man legs improbably folded beneath him, the way the horns curled around, not dissimilar to horned bovine and ovine I’d drawn elsewhere, the strength obvious in the shape of its shoulder and back. Each pen mark gave me more information. For that moment, I was still. 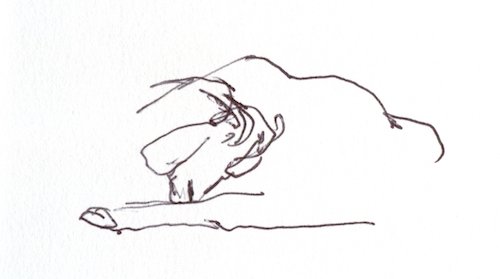 Draw any goat. It doesn’t have to be a goat.

And that, perhaps more than anything was the lesson I learnt from that half hour spent near the horse yards watching this character chewing its cud. I thought I wanted to rest. I thought that I needed to read my novel, or lie around in order to gather up the energy to go back out into the world. But by taking up a pen and sketchbook, finding a comfy spot in a comfy chair, concentrating just on what is in front of me, nothing else, for the time it takes to really look at it, I was actively resting.

At the end I had something physical to show for it, I’m not unhappy with the result. More importantly, the meditative concentration restored me in a way that doing *nothing* couldn’t. Doing nothing is important, don’t get me wrong; there needs to be downtime if we are going to be effective at uptime. But adding some active stillness into that downtime, enriches it.
And us.

Fordsdale Farmstay is between Gatton and Clifton in SE Qld’s Lockyer Valley. Horseriding day trips, glamping horseriding weekends, book via Sue’s website. Camping booking for tents and campertrailers (no caravans) book via hipcamp. This sketch shows the glamping bell tents, set up on the edge of the escarpment, looking on are Tip the Wonder Dop, one of the goats, and one of the horses. (not to scale😉)

Six years ago, in September 2012, I was the judge of the first Holy Name School Art Show. Judging children’s art is always problematic, so this blog, which is a transcript of my opening night speech, addresses issues of competing and being an artist, even at primary school age. It gives advice to children and their parents’, that is relevant to all artists.

How to write your artist cv

Twice recently I’ve been asked about how to write an artist cv. The first artist applying for a grant for a workshop, the second needing one to complete an entry for a juried art show. Time, it seemed, to share some info from my “Success and the Business of Artwork” professional development workshop that I’ve been teaching for a few years now. 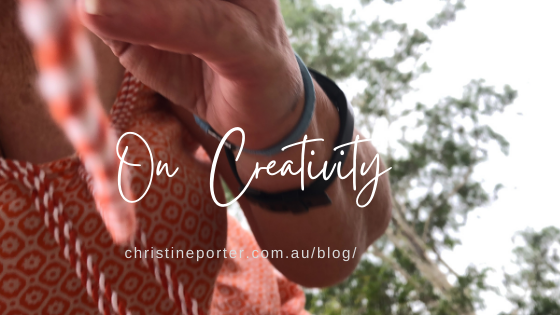 Creativity isn’t just making art. It’s a way of living that encompasses all parts of a person’s life. Including their art practice.

To air-con or not, that is the question…

I live in a place known as “The Wok” My car, at lunchtime today, parked down town, told me it was 43 degrees Celsius. As